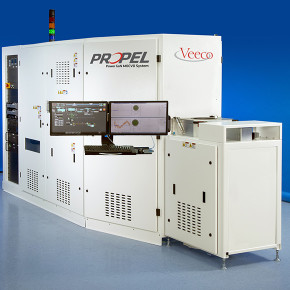 'Our prior learning with Veeco's K465i™ GaN MOCVD system drove us to investigate the Propel HVM platform for our production ramp,' said Marnix Tack, PhD, senior director of corporate R&D and Open Innovation at ON Semiconductor. 'The beta test results demonstrated superior device performance with high uniformity and within-wafer and wafer-to-wafer repeatability, while meeting our cost-of-ownership targets for six- and eight-inch wafers. As such, the Propel HVM system proved to be the most suitable platform for our power electronics manufacturing needs.'

'The Propel HVM platform is rapidly gaining traction in the industry as innovative companies like ON Semiconductor recognize the benefits of GaN-on-silicon, which will partially replace current silicon technology for power electronics,' commented Peo Hansson, PhD, senior vice president and general manager of Veeco MOCVD operations. 'With its highly controlled doping, run-to-run stability, superior wafer uniformity, high productivity and uptime, Propel HVM extends the benefits of our TurboDisc® platform to a unique single-wafer architecture. These capabilities benefit customers that seek a superior solution for manufacturing while providing a path for scaling to eight-inch wafers and expansion to RF and other advanced applications.'

GaN is a wide band gap semiconductor material with specific advantages over conventional technologies such as gallium arsenide (GaAs) and silicon carbide (SiC). GaN has enormous potential in the short term due to its benefits in terms of thermal behavior, efficiency, weight and size. According to market research firm Yole Développement, the GaN power device business was worth $14 million in 2016, and projects that it will reach $460 million by 2022, with a compound annual growth rate (CAGR) of 79 percent. GaN-based devices will be used increasingly in RF amplifiers, LEDs and high voltage applications among others, primarily due to their abilities to operate at high frequency, power density and temperature with improved efficiency and linearity.

Veeco is discussing the power of its innovative MOCVD and wet etch systems in the '5G: Where Are We and What's Next?' track at the CS International Conference this week in Brussels, Belgium. Somit Joshi, senior director of MOCVD marketing is presenting a session titled, 'Enabling GaN RF and Power Electronics through Innovative MOCVD and Wet Etch Process Technologies,' on Wednesday, April 11, and the Veeco team will also be accepting the CS Industry 2018 Award for Innovation for its GENxcel™ R&D MBE System at the awards ceremony held during the conference.

Email ThisBlogThis!Share to TwitterShare to FacebookShare to Pinterest
Labels: MOCVD, ON Semiconductor, Veeco