Applied Materials Inc, the world’s largest supplier of tools used to make semiconductors, reported lower-than-expected quarterly revenue, largely due to slowing smartphone sales. However, it seems that they had recent success in selective etch and Olympia ALD sales.

Applied Materials' CEO Gary Dickerson reported the following on Q4 2016 Results: "Our leadership businesses are in a really great position to grow. In 2016, we converted well over 90% of our development positions to volume production wins. We’re also making significant market share gains in Etch and CVD. Fiscal 2016 was our third consecutive year of growth in CVD and fourth consecutive year of growth in Etch where revenues reached a 9-year high. Overall our combined Etch and CVD revenues exceeded $2.7 billion for the year. I’m very excited by our product pipeline line in Etch and ALD. We’re seeing rapid adoption of our innovative new solutions, including selective Etch and Olympia ALD that together generated more than $230 million of revenue this year."

Posted by Jonas Sundqvist at 5:27 AM No comments:

Semiconductor Today reports: The majority of AIX R6 MOCVD system inventory (for GaN LEDs) – which amounted to €19.3m at the end of September – was sold in Q3 (and will be shipped in the coming months). Also, throughout Q3 there were strong shipments of Planetary reactor systems particularly for red, orange, yellow (ROY) LED optoelectronics and power electronics. "We continue to be in a solid position in MOCVD outside GaN LEDs," notes president & CEO Martin Goetzeler. Also, Aixtron has completed one customer's qualification program for atomic layer deposition (ALD) tools for high-k oxide films; in Q3/2016 such silicon applications (including spares) comprised 25% of total revenue.

Posted by Jonas Sundqvist at 9:51 PM No comments:

Email ThisBlogThis!Share to TwitterShare to FacebookShare to Pinterest
Labels: Aixtron

Merck’s Performance Materials division, however, posted a 1.3% fall in third-quarter sales year on year to €645m, while earnings before interest, taxes, depreciation and amortisation (EBITDA) pre exceptional items fell 5.4% during the period, year on year, to €282m.

“However, the acquisition-related sales increase of 3.5% attributable to the SAFC Hitech business of Sigma-Aldrich, which has been integrated into the Performance Materials business sector, had a positive impact.”

Full story : LINK
Posted by Jonas Sundqvist at 6:38 AM No comments: 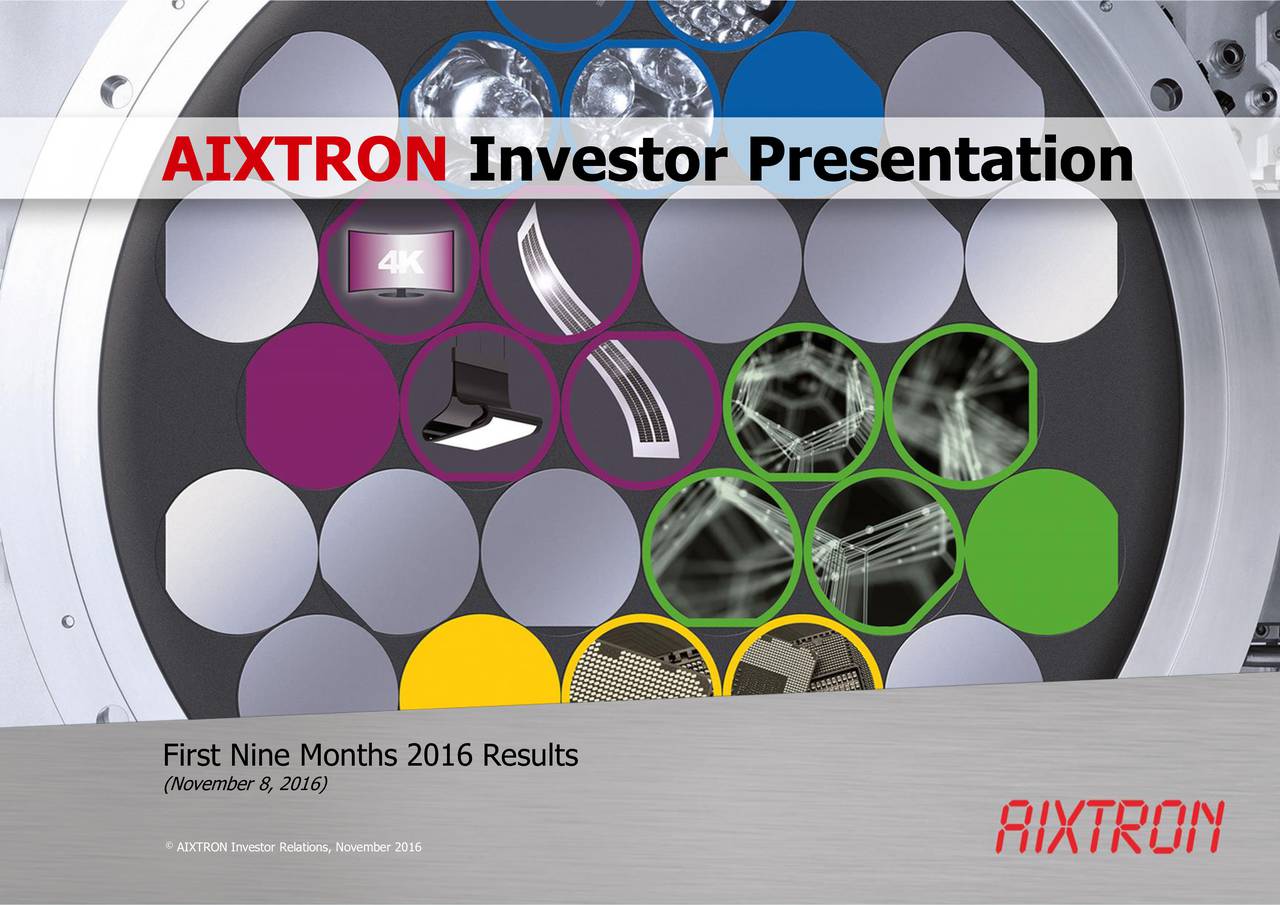 Please find the full transcript of the Q3 earnings call here and the slides here. Boot supplied by Seeking Alpha.
Posted by Jonas Sundqvist at 11:17 AM No comments:

Veeco Instruments Inc. announced September 2013 that it has signed an agreement to acquire privately held Synos Technology, Inc. (“Synos”) and went through with the acquisition. At the time Synos was developing and manufacturing Fast Array Scanning™ Atomic Layer Deposition (FAST-ALD™) systems that are enabling the production of flexible organic light-emitting diode (OLED) displays for mobile devices.


Despite recent rumors that the display industry is adopting ALD OLED barrier technology Veeco has announced a cost savings program for ALD. Here are some insights to the Veeco ALD cost reduction program as reported during the Veeco Instruments Q3 2016 Results - Earnings Call (Seeking Alpha Transcript)

John R. Peeler - CEO, Veeco Instruments, Inc.
"More recently, we reduced investments in our atomic layer deposition technology development. We weighed the investments necessary to establish and grow a position in ALD with the potential and expected timing for returns and although we continue to make progress in our development efforts for advanced semiconductor applications, the timing for potential revenue realization was delayed. As a result, we decided to significantly reduce our ALD expenses. In total, we now expect to lower the company's cost structure by $30 million on an annual basis. These savings translate into an EBITDA break-even level at or below $75 million in quarterly revenue, starting in Q1 2017."

Posted by Jonas Sundqvist at 4:51 AM No comments: