Micron Starts Construction of Its Third NAND Fab in Singapore

Micron this week broke ground on its new fab in Singapore that will be dedicated to manufacturing 3D NAND flash memory. Set to be completed late next year, Micron is not disclosing the production capacity of the new plant, only saying that its investments in the project are going to total billions of U.S. dollars. In addition, the company is disclosing its plans to expand its R&D activities in Singapore. 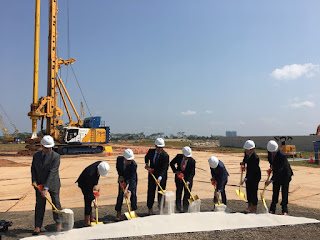 The new semiconductor production facility represents the third phase of Micron’s Fab 10 expansion and will be located adjacent to the existing complexes. The new plant will be built on a 165,000 m2 land plot at North Coast Drive. The new Fab is expected to be completed sometimes in the middle of 2019, Micron plans to get the first wafers from the new fab sometimes in Q4 2019. The ramp up of the facility is going to take several quarters, so expect significant volumes of 3D NAND memory to come out of the new fab towards the end of calendar 2020.

Source: AnandTech LINK
Posted by Jonas Sundqvist at 3:52 AM