After being pushed out since the first intended insertion at 32 nm EUV lithography is now heading for production. ASMLs financial supporters (Intel, TSMC and Samsung) will reportedly start using EUV at 7 nm and are ordering additional EUV tools froma ASML.
According to Peter Wennink, ASML's president and CEO, the 21 systems in the backlog are heading to five different customers. One can assume that these are Intel, Samsung, TSMC and Globalfoundries and either Micron or Hynix. He also said that ASML has two additional potential customers for EUV orders. 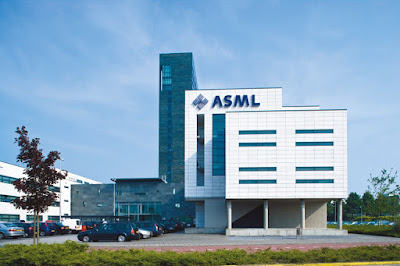 ASM Head office and engineering buildings in Veldhoven, NL (www.asml.com)
Interesting now is to see how this all plays out for ALD tools sales since Immersion lithography based multiple patterning spacers is one of the biggest segments for ALD tool sales by ASMI, Jusung Engineering, Applied Materials and Tokyo Electron. However, it is a symbiotic situation and there are a limited number of paths forward in scaling so most probably overall it is most beneficial for ALD that scaling continuous rather than coming to an halt.

More details through these reports:

ASML said it expects to sell 20-24 EUV systems next year as the technology edges closer to being deployed in production by chipmakers.
Posted by Jonas Sundqvist at 3:24 AM