Total revenues for Q1/2017 increased to EUR 53.6m (Q1/2016: EUR 21.4m; Q4/2016: EUR 89.8m). This figure, which represents the highest Q1 revenues since 2011, was supported by a solid order backlog and mainly driven by demand for production systems for Opto and Power Electronics, LEDs, as well as for Memory applications. 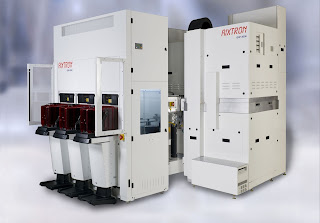 Cash and cash equivalents (including cash deposits with a maturity of more than 90 days) increased to EUR 193.6m as of March 31, 2017, as against EUR 160.1m as of December 31, 2016. The difference is mainly due to the collection of receivables.
Full press release: http://www.aixtron.com/en/press/press-releases/detail/aixtron-gruppiert-portfolio-fuer-zukunftstechnologien-mit-individuellen-finanzierungskonzepten/
Posted by Jonas Sundqvist at 10:22 PM

Email ThisBlogThis!Share to TwitterShare to FacebookShare to Pinterest
Labels: Aixtron