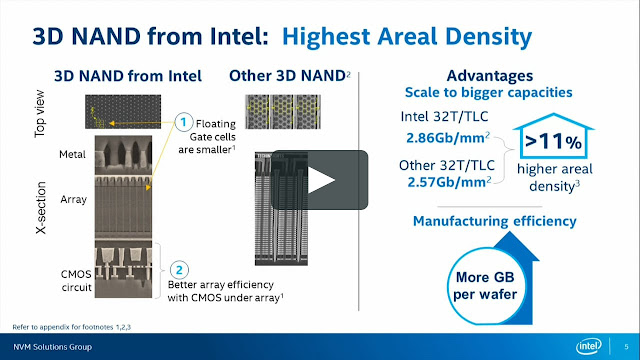 Presentation Intel 3D NAND from Intel: Bringing Amazing SSDs to the Mainstream (LINK)
According to DRAMeXchange and industry sources on March 2, China’s Tsinghua Unigroup and Intel are discussing how to work together to develop and produce 3D NAND technologies in the long term.

DRAMeXchange released its report on the 1st, saying, “According to the contract, Intel has decided to deliver wafers for NAND flash chips first before supplying 64-layer 3D NAND flash chips. With Intel’s support, Tsinghua Unigroup’s products will be able to improve not only its competitiveness in sales but also its brand awareness in the market.”

Tsinghua Unigroup and Intel are leaders that can create a remarkable synergy of capital and technology. Tsinghua Unigroup is the biggest beneficiary of the Chinese government’s plan to invest 1 trillion yuan (US$157.53 billion or 170.61 trillion won) in order to raise its semiconductor self-sufficiency rate to 70 percent by 2025. Tsinghua Unigroup’s NAND plant, which has been constructed with the investment of 26 trillion won (US$24.01 billion), will start manufacturing 32-layer 3D NAND flash chips from the end of this year and expand the facilities to significantly increase the production next year.
Source: BusinessKorea  LINK

Posted by Jonas Sundqvist at 9:58 PM