Is the semiconductor industry preparing for ruthenium again?

As cobalt is being implemented for 10/7 nm logic interconnects, the next contender on roadmaps for the leading IDMs and foundries is ruthenium. This is not the first time that ruthenium comes into play, ruthenium has on regular basis been on the DRAM and Logic manufacturers roadmaps. Last year there was several indications that ruthenium is back again including that you could spot a rice in ruthenium metal pricing. However, since I started in the semiconductor world 2003 I think that I have managed to been part of six ALD/CVD ruthenium programs and I am happy that one of them is still running (this was my shortest participation, all in all 7 days).


So why do you want to use an expensive and rather fancy metal like ruthenium in interconnects? The lowest Ru resistivity reported for use in interconnects is 15 μΩ-cm, at a cross-sectional area of 300 nm2. Ru damascene metallization is extendible to features with critical dimension around 10 nm and Ru may match Cu line resistance for line dimensions below ~17 nm.

Therefore, as semiconductor devices become even smaller at sub 7 nm nodes, Ru is a strong candidate for replacing some of the back end and middle of the line Cu as the interconnect material or as a liner/barrier/seed for metallization.

At AVS ALD 2018 in Incheon South Korea there was a high number of presentations on ruthenium. Besides the oral presentations here below there were also a number of interesting posters. You can get the abstracts by searching "ruthenium" in the AVS ALD conference planer (LINK).


The last contribution by Umicore is especially interesting since it explain in great details the whole supply chain of ruthenium today including: 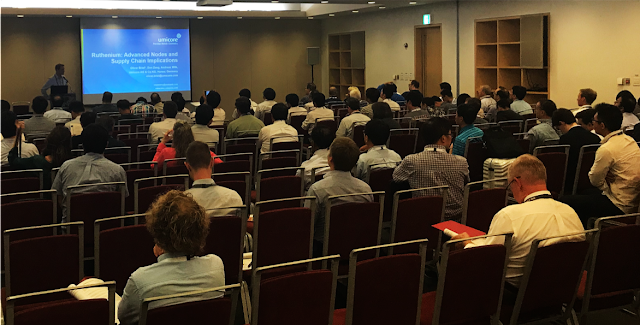 Another event taking place this summer was the Imec US Technology Forum in San Fransisco, also here ruthenium was again on the agenda. According to a recent article in C&EA (LINK), reporting from the annual Imec Technology Forum, Imec experts made the case that the metal ruthenium has potential to replace copper in interconnect. Such a replacement could prevent the semiconductor industry from tripping over a wiring problem in coming years. The main information was given in a talk by Zsolt Tokei - Program Director Nano-interconnect, imec:

New Conductors - Reality or not? [LINK]
For several decades Cu, Al and W were used for interconnect wiring. Recently, due to resistance and reliability concerns alternatives to conventional conductors gained significant interest. Alternative metals are of interest to both memory and logic chips. In this talk imec’s conductor research activities will be showcased with a few implementation examples using damascene or subtractive processes. Benchmark to conventional conductors as well as future perspectives will be provided.

Before that there was also the IITC 2018 and there ruthenium was on the agenda as well. One interesting presentation was the Adelman et. al also from Imec, “Alternative Metals: from ab initio Screening to Calibrated Narrow Line Models” (LINK).
So as for now, ruthenium is on the roadmaps for 5 nm and below but not yet implemented in HVM by any Foundry. However there is a reverse engineering report claiming that ruthenium has been found in Intels 10 nm technology [LINK].

Posted by Jonas Sundqvist at 5:03 AM