The 7nm race by TSMC and Samsung - EUV or not EUV

Sales in ALD and Etch equipment have been boosted by multiple patterning technologies based on Immersion lithography, both for Logic/Foundry and Memory. Maybe as much as 1/3 of the single/multi wafer ALD equipment market is patterning related. The last two years or so analyst have been busy trying to figure out the impact on deposition and etch equipment sales if/when EUV is introduced. Here is a recent take down by Seeking Alpha (LINK). My view is that scaling is based on symbiotic use of the latest technologies and multiple patterning and EUV will co-exist and keeping the scaling path alive. In addition, scaling opens new opportunities for ALD, ALEtch and future use of selective growth technologies with atomic scale precision. According to recent reports the ALEtch market segment is now considerd an actual segment by itself and has entered HVM (LINK).
Fudzilla reports: Korean based ETNews has mentioned that Qualcomm 7nm manufacturing has been a big win for TSMC while two other US and China customers chose Samsung’s 7nm. TSMC traditionially have dibs on Nvidia and MediaTek according to the report.

Qualcomm and Broadcom, according to the report are designing their next generation chips with TSMC’s7-nano PDK. The reason why Qualcomm went with 7nm with TSMC is the fact that the fab uses normal steppers while Samsung wants to make its 7nm with more bold and riskier EUV (Extreme Ultraviolet) photolithography technology. 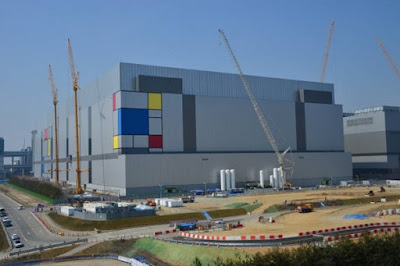 
Samsung is expected to be later to the 7nm game and early adopters had to go with TSMC. EUV is still technology that is not entirely ready for the mass market and there is a disagreement weather you should need to use Extreme Ultraviolet light manufacturing with 7nm or first with 5nm. Obviously the two main fabs disagree while GlobalFoundries cooperates and shares technology with Samsung, and will have Samsung to rely upon for 7nm.

Posted by Jonas Sundqvist at 11:35 PM