Semiconductor Capital Spending Is Forecast to Grow 10.2 Percent in 2017

(Gartner press release, August 2, 2017) Worldwide semiconductor capital spending is projected to increase 10.2 percent in 2017, to $77.7 billion, according to Gartner, Inc. This growth rate is up from the previous quarter's forecast of 1.4 percent, due to continued aggressive investment in memory and leading-edge logic which is driving spending in wafer-level equipment (see Table 1).

"Spending momentum is more concentrated in 2017 mainly due to strong manufacturing demand in memory and leading-edge logic. The NAND flash shortage was more pronounced in the first quarter of 2017 than the previous forecast, leading to over 20 percent growth of etch and chemical vapor deposition (CVD) segments in 2017 with a strong capacity ramp-up for 3D NAND," said Takashi Ogawa, research vice president at Gartner.

According to Gartner's latest view, the next cyclical down cycle will emerge in 2018 to 2019 in capital spending, compared with 2019 to 2020 in the previous quarter's forecast. "Spending on wafer fab equipment will follow a similar cycle with a peak in 2018. While the most likely scenario will still keep positive growth in 2018, there is a concern that the growth will turn negative if the end-user demand in key electronics applications is weaker than expected," said Mr. Ogawa. 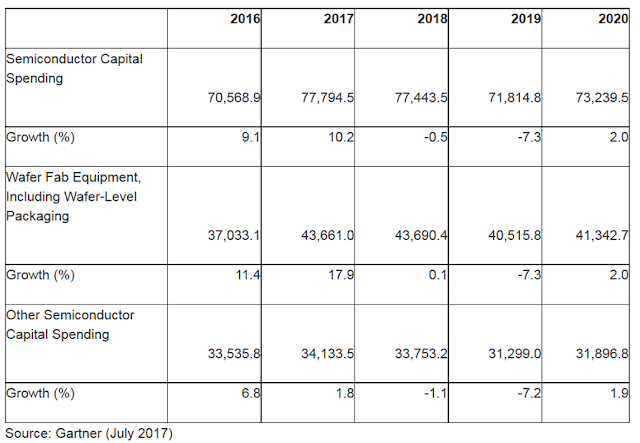 Posted by Jonas Sundqvist at 10:31 PM