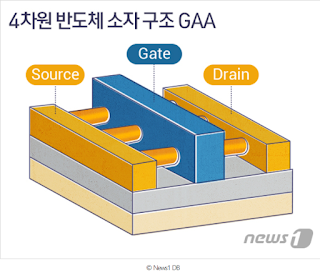 Samsung refers to GAA as a 4-dimensional technology in their marketing pitch. (News 1 Korea)
The "Semiconductor Vision 2030" goal for Samsung Electronics is to become the world's No. 1 semiconductor maker in 2030, and investment in the foundry market will be in full swing to secure economies of scale.

The cost (more than 20 trillion won) to build this new EUV fab equals to building three Incheon airports according to Samsung Electronics and will be ramped with a 3 nm process. Whereas the new Hwasung fab new plant is scheduled to start operation 2020 ramping 7 nm, 5 nm, and 4 nm. As of 5 nm, the transistor architecture will be transferring from current FinFET technology GAA-FETs (Gate-All-Around FETs).
Source: News1 Korea (LINK)

Posted by Jonas Sundqvist at 12:51 AM