Santa Clara, Calif., February 9, 2017 – GLOBALFOUNDRIES today announced plans to expand its global manufacturing footprint in response to growing customer demand for its comprehensive and differentiated technology portfolio. The company is investing in its existing leading-edge fabs in the United States and Germany, expanding its footprint in China with a fab in Chengdu, and adding capacity for mainstream technologies in Singapore. 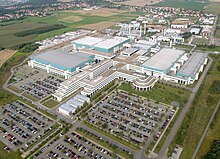 In Germany, GF plans to build up 22FDX® 22nm FD-SOI capacity at is Fab 1 facility in Dresden to meet demand for the Internet of Things (IoT), smartphone processors, automotive electronics, and other battery-powered wirelessly connected applications, growing the overall fab capacity by 40 percent by 2020. Dresden will continue to be the center for FDX technology development. GF engineers in Dresden are already developing the company’s next-generation 12FDXTM technology, with customer product tape-outs expected to begin in the middle of 2018.


In China, GF and the Chengdu municipality have formed a partnership to build a fab in Chengdu. The partners plan to establish a 300mm fab to support the growth of the Chinese semiconductor market and to meet accelerating global customer demand for 22FDX. The fab will begin production of mainstream process technologies in 2018 and then focus on manufacturing GF’s commercially available 22FDX process technology, with volume production expected to start in 2019.

Posted by Jonas Sundqvist at 8:59 AM