ALD Equipment is part of The Made in China 2025 Strategy

The "Made in China 2025 Strategy" includes Atomic Layer Deposition (ALD) for the semiconductor industry and especially Memory manufacturing (3DNAND Flash). This information was given by as part of a briefing at ISS2017 "China Semi Equipment Momentum and AMEC Briefing", by Gerald Z. Yin, Chairman of the Board and CEO of AMEC [LINK], which have been reported by EE Times [LINK]

As further background, in November 2015 (after the "Made in China" announcement, May 19, 2015, LINK) the China Integrated Circuit Industry Investment Fund Co. Ltd., together with Advanced Micro-Fabrication Equipment Inc. (AMEC) and Suzhou Juyuan Dongfang Investment Fund (Limited Partnership) announced that they have invested US$42 million in Piotech Co. Limited. [Source]

Piotech is Headquartered in Shenyang, China, and manufacture CVD equipment. Recently Piotech has also announced a ALD business segment and products for 300 mm wafer processing. The ALD tool developed by Piotechy can be used for Semiconductor and Advanced Packaging (TSV) applications. At present  high and low temperature SiO2, SiN, and Al2O3 is offered that will soon expand to High-k and metal nitride ALD technology. The ALD chambers can be combined with the production capacity of the PF-300T PECVD platform. 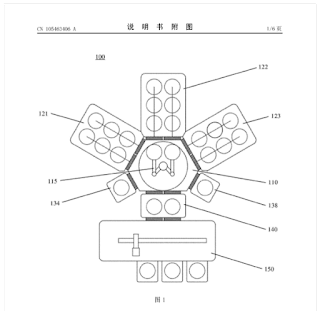 Piotech has chinese active IP  [ALD (atomic layer deposition) equipment , CN204080102U] on a very interesting 6 wafer station chamber that can be clustered. By this it is clear that the company has a clear strategy to take market share in ALD since the competition in ALD for 3DNAND have 5 to 6 wafer capability (Jusung, Applied Materials & Tokyo Electron). It is not known if the 300mm ALD tool above has these type of multi wafer chambers.

Besides ALD and Piotech AMEC is alo investing in Bejing NMC (Etch, PVD and APCVD) and Bejing Sevenstar (Furnace & Wafer Cleaning), who also have some filed IP in ALD.

Posted by Jonas Sundqvist at 5:38 AM