According to Gartner the semiconductor equipment market grew 12% in 2016. They have seen aggressive capital spending for NAND flash facilities that "propelled the Material Removal/Clean and RTP and Oxidation Diffusion segments to deliver more than 20% annual growth" (Gartner).

The market for Atomic Layer Deposition (ALD) contracted less sharply in 2016 than anticipated, but ASMI, however, lost more market share than expected. This was concluded by an analysts at Morgan Stanley based on figures from Gartner.

Stock market analysts watching ASM International N.V. (NASDAQ:ASMI) have recently changed their ratings on the stock following the release of the Gartner recently released report on Wafer Equipment companies. Apparently ASMI has lost considerable market shares in ALD to Jusung Engineering and Applied Materials in 2016. The two ALD batch companies Tokyo Electron and Kokusai were stabel in their ALD segment (Please note that TEL does not split their ALD business into Single/Multi wafer and Batch anymore). Also Lam Research lost market share in ALD according to reports.

The ASMI market share in ALD was 64% and is now down to 54% (remark: Gartner does not include Hitachi Kokusai, PV passivation, AMOLED Encapsulation and the smaller ALD players on the market) while the wafer based ALD market only dropped 3% (Source in Dutch: Morgan Stanley benieuwd naar uitkomst belang in ASM PT)

My take on this is that the 300 mm wafer fabricators are moving to Spatial ALD technology for multipatterning due to Cost of Ownership. I can only see it as the ASM XP8 with its 8 chambers (4 twin chambers) must have lower productivity than the multiwafer Spatial ALD tools (Jusung SPD, TEL NT333, AMAT Olympia). Also Lam Research 2x4 station platform does not seem to compete with Jusung 2x5, Applied Olymipa and TEL NT333 2x6 Wafers, which reportedly is taking market shares in low temperature SiO2 for multipatterning.

Jusung was one of the early starters for SADP at Qimonda with their Spatial Cyclone+ tool running low temperature SiO2 ALD 2006 to 2009 and therefore have 10+ years of experience for this technology so that may explain their fast growth now.

ASMI had a recent call with investors (Q4 2016 Earnings Call, March 3, 2017) and here is an outlook given on the ALD single wafer market, which should recover and continue to grow in 2017 :

"After strong growth in the 2013 to 2015 period, the single-wafer ALD market went through a double-digit contraction in 2016. Weakness in memory was only partially offset by strong growth in the Logic/Foundry segment. In 2017, we expect condition to improve and the ALD market to show a clear recovery compared to last year. Longer term, we continue to expect healthy growth for ALD. We forecast the single-wafer ALD market to reach a size of $1.5 billion by the 2020-2021 timeframe. We earlier expected the market to reach the $1.5 billion level by 2019. Our updated view is mainly explained by lower expectations for the DRAM segment. Still, our updated forecast implies a solid double-digit growth path for the coming years." 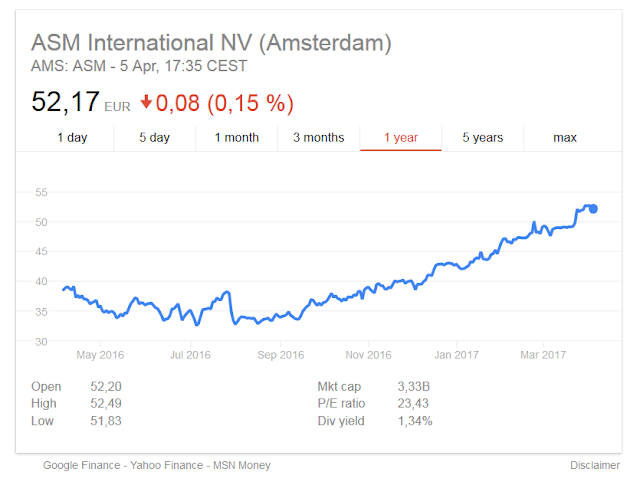 Posted by Jonas Sundqvist at 1:33 PM