Santa Clara, Calif., June 13, 2017 – GLOBALFOUNDRIES today announced the availability of its 7nm Leading-Performance (7LP) FinFET semiconductor technology, delivering a 40 percent generational performance boost to meet the needs of applications such as premium mobile processors, cloud servers and networking infrastructure. Design kits are available now, and the first customer products based on 7LP are expected to launch in the first half of 2018, with volume production ramping in the second half of 2018. 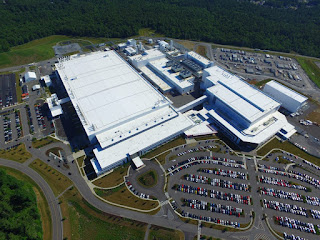 Globalfoundries Fab8 in NY, USA
In September 2016, GF announced plans to develop its own 7nm FinFET technology leveraging the company’s unmatched heritage of manufacturing high-performance chips. Thanks to additional improvements at both the transistor and process levels, the 7LP technology is exceeding initial performance targets and expected to deliver greater than 40 percent more processing power and twice the area scaling than the previous 14nm FinFET technology. The technology is now ready for customer designs at the company’s leading-edge Fab 8 facility in Saratoga County, N.Y.

“Our 7nm FinFET technology development is on track and we are seeing strong customer traction, with multiple product tapeouts planned in 2018,” said Gregg Bartlett, senior vice president of the CMOS Business Unit at GF. “And, while driving to commercialize 7nm, we are actively developing next-generation technologies at 5nm and beyond to ensure our customers have access to a world-class roadmap at the leading edge.”

GF also continues to invest in research and development for next-generation technology nodes. In close collaboration with its partners IBM and Samsung, the company announced a 7nm test chip in 2015, followed by the recent announcement of the industry's first demonstration of a functioning 5nm chip using silicon nanosheet transistors. GF is exploring a range of new transistor architectures to enable its customers to deliver the next era of connected intelligence.

Posted by Jonas Sundqvist at 11:10 AM