TSMC 5nm will improve logic density by 1.8X over 7nm

[Hexus] In the wake of the recently published Q1 2019 results, TSMC's Vice Chairman & CEO C. C. Wei provided information about TSMC's progress, in an earnings call. TSMC is ploughing on with its 6nm and 5nm plans. TSMC refers to its 7nm process as N7, and 6nm and 5nm processes as N6 and N5, respectively.
N5 will be a large and long-lasting node at TSMC concluded:
"Our N5 technology development is well on track. N5 has entered risk production in first quarter, and we expect customer tape-outs starting this quarter and volume production ramp in first half of 2020. With 1.8 times logic density and 15% speed gain and an ARM A72 core compared with 7-nanometer, we believe our N5 technology is the most competitive in the industry. With the best density performance, power and the best transistor technology, we expect most of our customers who are using 7-nanometer today will adopt 5-nanometer. With N5, we are expanding our customer product portfolio and increasing our addressable market. Thus, we are confident that 5-nanometer will also be a large and long-lasting node for TSMC." [Seeking Alpha, Transcript LINK]
C. C. Wei – Chief Executive Officer 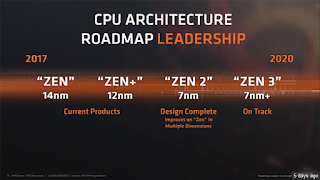 Future AMD Ryzen series processors can feature a major density uplift with TSMC’s 5nm process node compared to upcoming 7nm based Ryzen 3000 series chips. The details of the TSMC 5nm or N5 process node were released last month and give us an insight into what to expect from future generations of Ryzen processors and how they would stack up against the competition versus the Intel lineup.
Source: WCCFtech LINK

Posted by Jonas Sundqvist at 10:19 PM