Lam Research doubled install base of ALE in Logic 2016

Lam Research just presented their 4Q/2016 earnings. 2016 was the fifth consecutive year of growth and outperformance for Lam with a shipments CAGR of almost 20% over that period and shipments grew to a record $6.7 billion. As an example of the success 3D NAND shipments grew by over 80% in 2016, almost twice the rate of growth in NAND’s WFE. Please find all detailas in the Seeking Alpha Earings Call Transcript here.

With respect to new existing atomic level control technology Lam has strengthened its momentum in foundry and logic with significant application share gains from the 2016 nodes to the 10 and 7 nanometer nodes. As an example, during the quarter they more than doubled their install base for  Atomic Layer Etch (ALE) system for logic self-aligned contact application with their dielectric etch product and mixed mode pulsing technology. 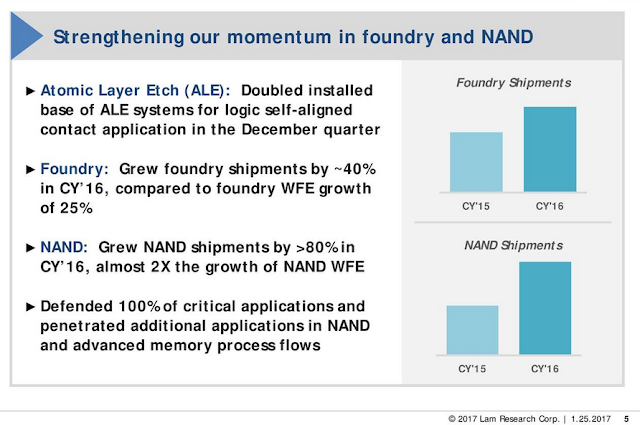