ALD - Why ASMI is doing so well

[BITS&CHIPS] Grueling work with Intel cemented the company’s position in the atomic layer deposition market, but the emergence of more ALD semiconductor applications was required for that investment to really pay off. The story of why ASM International is doing so well these days.

ASM International is on a roll. While the semiconductor industry has been experiencing a cold spell since mid to late 2018, the Almere-based semiconductor equipment maker has been posting one quarterly sales growth after the other. Last July, front-end sales even reached an all-time record – and the orders keep pouring in. Many of those are for ASMI’s atomic layer deposition (ALD) systems, which at the moment are its best selling product line, CEO Chuck del Prado noted in a conference call with investors, though he added demand is generally healthy in other businesses as well.
Full story: When persistence pays off: why ASMI is doing so well [LINK] 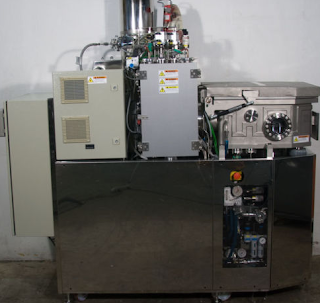 An ASM Pulsar 2000 form the year 2000 (Photo CAE LINK), which was used by many semiconductor fabs for the early development of ALD High-k in both logic and DRAM (Al2O3, ZrO2, HfO2, and others). One of the first high volume manufacturing applications was dielectric layers for GMR and TMR magnetic heads by, e.g., Seagate. The 200 mm single wafer ALD reactor was later made as a 300 mm reactor for the first roll-out of high-k ALD at Intel 45 nm node in 2007. The Pulsar was typical at the beginning used on the Polygon platform. However, now it is available on the new more productive XP series of the ASM platforms (LINK).
Posted by Jonas Sundqvist at 12:39 PM