Samsung and SK Hynix to increase fab investment in semiconductors

The Korea Times Report: Samsung Electronics and SK hynix plan to invest up to 45 trillion won to enhance their semiconductor manufacturing facilities mostly in Korea, officials directly involved with the matter said Monday.

While consumers may know the brands for handsets and TVs, Samsung is the long-time leader in the semiconductor industry. SK hynix is the runner-up. 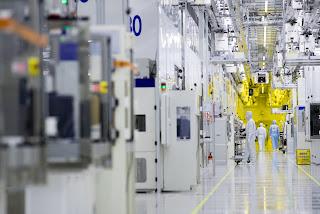 An SK hynix official said its adjusted 2018 investment is subject to change, according to market conditions. The company, affiliated with SK Group, earlier said it would invest 13 trillion won. The SK unit is actively using high chip prices to lift its position in the industry with the aggressive spending.

It is part of a consortium led by U.S.-based fund Bain Capital that agreed to purchase Toshiba's memory chip business, which was recently approved by China.


The revised investments by Samsung and SK coincide with the start of mass production at updated local fabrication facilities. Advances in the automotive industry, internet of things (IoT), artificial intelligence and biosimilar drugs are expected to drive demand for semiconductors in the coming years.

But beyond such looming industry trends, Samsung and SK hynix are taking advantage of the industry paradigm, as a consolidation encourages major suppliers to prioritize profits over market share.

Bit growth, a key barometer to gauge the health of the industry, becomes much more limited as shrinking the size of chips becomes increasingly more difficult.

Leading investment bank analysts covering semiconductors said memory prices continue to perform better than expected because demand from datacenters continues to surprise, particularly for DRAMs, a memory chip that both Samsung and SK have larger market shares in than NAND-type.

DRAM supply tightness is expected to persist in the near term but this constraint will be removed in the second half. "Given factors seen in the market, even if Samsung and SK hynix become more aggressive with their capacity (investment) plans that wouldn't hurt the industry much," said one senior fund manager.

"Although the risk of DRAM oversupply next year is becoming more of a concern with Samsung Electronics' increasingly aggressive capacity expansion, the situation for 2018 is better than earlier predicted and the market has so far failed to take this into account. Both DRAM and NAND prices are stronger than expected, which bodes well for earnings this year," the manager said.

Mainstream NAND contract and spot prices continue to decline, but not as severely as expected. The industry is making efforts to encourage NAND flash content growth in smartphones by offering high-NAND flash content products at lower prices.

As the industry also continues its transition to three-dimensional NAND and improves yield, supply is likely to exceed demand and some expect NAND prices to continue to be under pressure.

Samsung and SK control more than two thirds of the DRAM market. DRAM chips, along with NAND flash memory, are commonly used in smartphones, PCs and portable game consoles.


Posted by Jonas Sundqvist at 9:48 PM