Samsung is preparing to double its previous investment in a contract related to its new EUV lines at the company's Hwaseong facilities. Samsung announced construction plans for Hwaseong in 2017, and broke ground in 2018 with completion scheduled for 2020. Samsung added 739 billion won to the original 723 billion won contract, signed back in September 2018, bringing its total value to around $1.29 billion. The work for this particular line is expected to be completed by April 2020. 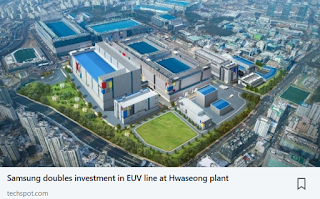 Posted by Jonas Sundqvist at 9:40 PM